Have you heard about the “Nick Saban” tax? 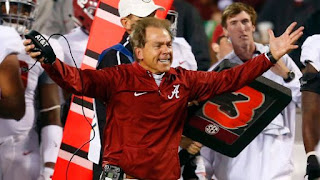 But there was an exception large enough for the Fortune 500 to drive through. The exception was for “performance.” Magically and almost overnight, virtually all executive compensation packages became based on “performance.” Options were considered performance-based, and eventually options came to be passed around like candy. Realistically, one had to refuse to do any tax planning for this provision to actually apply.

This changed with the Tax Cuts and Jobs Act passed in December, 2017. Congress tightened up this code Section (162(m)) by taking away the performance exception. The $1 million cap now has a real bite.

But Congress was still looking for money.

This creates a quandary, as nonprofits (generally) do not pay tax. If I were a nonprofit executive and Congress threatened to disallow my deduction, I would not be feeling the tremulous fear of my for-profit peers.

Congress thought of that. They decided that the nonprofit would pay a 21% tax on my behalf.

Whoa. Now you have my attention. Granted, the tax is not on me, but we all know how this works in the real world. Only small children and Congress believes in free. The rest of us have to pay.

Congress passed a tax provision applying the $1 million cap to the five highest- paid employees of a 501(a), which includes a 501(c)(3). Think nonprofits, certain hospitals, colleges and universities and the like.

BTW medical professors were excluded from this, so it appears clear that Congress was trying to reach the athletics programs and their coaches.

But there is a problem.

§ 115 Income of states, municipalities, etc.
Gross income does not include-
(1)  income derived from any public utility or the exercise of any essential governmental function and accruing to a State or any political subdivision thereof, or the District of Columbia; or …

What does this mean?

Congress thought that – by extending Section 4960 to reference Section 115(1) – it would reach those entities exempt via Section 115(1).

Entities such as Alabama.

Or the University of Alabama.

Because the University of Alabama is an instrumentality of the state of Alabama.

The Courts have looked at the interaction of Sections 115(1) and 511(which is the unrelated business income tax which applies to a nonprofit). Can a state instrumentality (say a university) run a business – say a farm-to-table restaurant chain – and avoid the unrelated business income tax because of Section 115(1)? If that were the case, then Illinois could start a chain called Outfront Steakhouse, make a zillion dollars and never pay tax because of Section 115(1).

The Courts have clarified that is not the case. There is a limit to Section 115(1).

According to that reasoning, it seems to me that Congress should be able to tax those university salaries.

Continuing our example, if the federal government wanted to tax Illinois for opening a steakhouse chain and locating them adjacent to every Outback Steakhouse location throughout the land, it would have to say something like:

… the [] tax will apply to an entity relying upon Section 115(1) for nontaxability of their [] business activity should that activity be the same or substantially similar to a business activity conducted by a for-profit restaurant chain.”

That is explicit. That breaches implied statutory immunity. The tax would then stick.

Is that what Congress did with the new Section 4960(c) tax?

There are universities clearly affected by this new law: Duke, for example, or Northwestern. They have to pay up. Think of it as the difference between a “public” university and a “tax-exempt” university.

But having the state name in the university’s name, however, does not mean that the university is exempt as “public.” It depends on how the university was organized and chartered. Texas A&M will be affected by the new tax provision, but the University of Texas - Austin will not. It is enough to give one a headache.

The easiest path is for Congress to revise Code section 4960 and clean up the language. Without Congressional action, you can be certain the “public” universities will litigate this matter. They have to.

But the likelihood of the present Congress accomplishing anything seems unlikely, at best.

The IRS And Bull

One thing with a blog by a practicing tax CPA: you get a feel for whatever is going across my desk at the moment.

Let’s get historical and look at a Supreme Court case from 1935.

The case is Bull v United States. I kid you not.

He was a partner in a partnership.

The executor then filed an income tax return for the estate.

The executor did not include the $212,719 representing Mr. Bull’s share of the profits after his death.

COMMENT: The quirky detail here is that the partnership agreement allowed Mr. Bull to participate in profits for the year even after he died. I interpret that to mean that his estate would participate, as Mr. Bull could not do so personally. After all, he died.

The IRS threw a conniption, arguing that the estate should have reported the $212,719 on its income tax return. The IRS assessed income taxes.

I think the IRS is right: the partnership income after Mr. Bull’s death is (income) taxable to his estate.

But I think the IRS was wrong to include that same income on the estate (that is, his net assets at death) tax return. Why? Simple: That income could not have been an asset to Mr. Bull at death as it did not exist as of the date of his death.

I say that the executor paid too much estate tax.

The executor agreed and wanted the taxes back.

Problem: too much time had elapsed. The refund was barred under the statute of limitations. The IRS had zero intention of refunding even a penny.

There was nothing in the tax law per se for a situation like this. Folks, this was the 1930s.

But we had a tradition of English common law and equity. The Supreme Court acknowledged that what was happening here was unfair.

·      There is one transaction underlying both tax situations.
·      The IRS claim for a deficiency allows for an argument of recoupment, since the overpayment and deficiency arose from the same transaction.
·      Recoupment as a defense is never barred by the statute of limitations. It cannot, as it is a doctrine of equity.

If the Supreme Court could not get to this result using the tax statutes available, it would get to the result by introducing what has come to be known as “equitable recoupment.”

The IRS had to allow the estate to offset one tax against the other. Allowing two bites at the same apple was inequitable. The key is that one transaction – the same transaction – is triggering two or more taxes

Bull was – from what I understand – the first time we see the equitable recoupment doctrine in tax law. In Bull it mitigated the otherwise severe absolutism of the statute of limitations.

OK, this was not a particularly thrilling day at my desk.