Posted by Cincinnati Tax Guy at 9:00 AM No comments:

Caught In A (IRS Mortgage) Trap

Sometimes it seems that the tax Code is a trap waiting to spring on some unfortunate.  This time let’s talk about a trap involving mortgages.

“… hereby grant, convey and assign to … the property with the address of …..”

The document was signed, but it was not notarized or recorded at the courthouse.

What is there to look at?

The Code does not allow one to deduct personal interest. It used to, and people could deduct interest on their car loans and credit cards. That law changed in 1986, and the Code now restricts which types of interest are deductible.

On first impression, it seems that Chris and Jennifer met this requirement.

Let’s look further at the definition of “acquisition indebtedness”:

Regulation 1.163-10T(o) defines secured debt as “… recorded, where permitted, or is otherwise perfected in accordance with applicable State law.’

There is the trap. 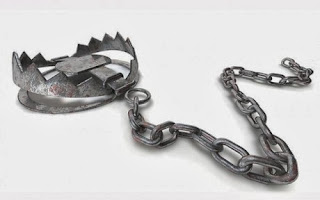 The debt has to be “perfected” under state law. The concept of “perfected” means that the secured creditor has a preferred position relative to an unsecured (or perhaps just a later) creditor. The money from that house goes to that mortgage holder, as he/she is first in line. Anyone else has to wait his/her turn.

Chris and Jennifer lived in Massachusetts, which requires a mortgage be recorded at the courthouse to be “perfected.”

The IRS – adding to its reputation of stabbing the dead – also charged Chris and Jennifer with the accuracy penalty. This is a “super” penalty and applies when the error trips certain dollar or percentage thresholds.

I cannot help but feel that the penalty was unnecessary. Is the IRS expecting people to be tax pros before they can fill-out their own tax returns? What are they going to do with me if I make a mistake on my return – shoot me?

I worry about this mortgage trap when working with intrafamily loans involving someone’s house. It can be tempting to cheat on attorney fees and not properly document or record the loan and mortgage.

If audited, one can expect the IRS to be as sympathetic to them as the IRS was to Chris and Jennifer.

Not the most exciting topics, and I will not miss Thursday Night Football reading up on them. Let’s review them quickly.

The Senator leads off with:

America today is using a bloated tax code that was built for businesses close to 30 years ago. The code is completely outdated and acting as a brake on economic growth.  More must be done to simplify tax rules, lessen the burden on small businesses and jumpstart job growth.”

I cannot disagree with him, but I am not optimistic about politicians – today, tomorrow – keeping their hands off any tax reform. Remember that Chief Justice Roberts deemed ObamaCare to be a “tax” – even though the White House itself did not present brief or argue it to be a tax. With that level of verbal schizophrenia, I would wager that any “reform” would last about as long as when the first politician needs to get reelected.

(1) Reduce the number of depreciation classes to four: three for short- to mid-term property and one for longer-lived assets. There would be only one permitted depreciation method.

a.     By longer-lived, think real estate, which Baucus proposes to depreciate over 43 years.

COMMENT: There goes the never-worked-in-the-real-world-crowd again. I have thirty years in this business, and I have never seen a proposed real estate investment analyzed over a 43-year recovery. Doesn’t happen, folks.

(3)  Allow expanded general asset accounting. This means that asset categories are pooled, and depreciation is calculated by…

a.     Starting with last year’s asset pool balance
b.     Increased by additions and improvements
c.      Decreased by proceeds from asset sales and dispositions
d.     And multiplying the result by a depreciation factor

Treat all gain from disposition of pooled assets as ordinary income.

a.     That means that – if a car is used for both business and personal use – the maximum cost that can be depreciated is $45,000. That amount in turn is depreciated over 5 years.
b.     I am not overly surprised. There is still a lot of abuse – truly – in this area.

Then there are some tax accounting changes:

(7) Repeal expensing for research and development expenses. The default treatment will be to capitalize and depreciate over 5 years.

COMMENT: This cannot make business sense. You want to explain this proposal change to Apple, Samsung, Pfizer, or any number of research-intensive companies?

(8) Disallow the deduction for advertising. In its place, you would deduct one-half immediately and then amortize the balance over 5 years.

COMMENT:  This makes no sense to an accountant. I associate depreciation and amortization with assets that have use or value over more than one year. Advertising doesn’t make that cut. Does anyone talk about the commercials from last year’s Super Bowl, for example?

COMMENT: Think fracking. The United States is increasingly moving to energy independence (Bakken Shale, for example), even under a hostile Administration. Do you think this change is going to help or hurt that effort?

(13)  All business with less than $10 million in annual gross receipts can use the cash basis of accounting and not account for inventory.

(14)  If you are not described in (13) then you are on the accrual basis of accounting.

COMMENT: When the government talks about accrual basis, they means that they want you to pay taxes on your receivables before you actually collect them.

(15)  Businesses described in (13) do not have to suffer through the Section 263A uniform capitalization calculations.

COMMENT: I do not particularly care for LIFO, but I acknowledge that major industries use it extensively, and it is considered GAAP when auditors render their auditors’ report. The government is not chasing this down because they had brilliant debates while in accounting theory class. They want the jack.

(17) The completed contract method of accounting (think contractors) is repealed, except for small construction contracts.

And remember folks: these are only proposals.