What Does It Take To Get Reasonable Cause Around Here?


My partner has a difficult IRS penalty issue.

He expects a client to be penalized for more than one year. This complicates how we handle the first year. 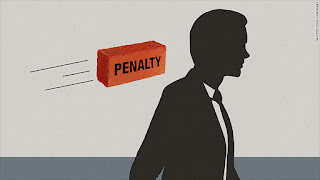 The IRS has reorganized its penalty review function to a system called the Reasonable Cause Assistant (RCA). There however is a problem: the system does not work well. The Treasury Inspector General for Tax Administration (TIGTA) reported that RCA was inaccurate 89% of the time in 2012.

Step away from RCA and you still have the following:

* It used to be that penalties were assessed as a means to encourage voluntary compliance. Many tax pros feel that is no longer the case, and penalties are being used as a means to raise revenue.  An example is the penalty assessed for late filing of a partnership return: $195 per month per partner. Take a 10-person partnership, file a week late and face a $1,950 penalty. There is little consideration for the size of the partnership, its total assets or revenues - or the fact that partnerships do not pay federal taxes.

* Penalties are assessed even when taxpayers are trying to do the right thing. For example, enter into a reportable transaction, disclose it on your tax return but forget to file a copy with a second office and you will be assessed a penalty. Fail to disclose the transaction at all and you will be subject to the same penalty.

* The IRS is automatically asserting penalties. For example, for fiscal year 2015, the IRS assessed over 40 million penalties on individuals and businesses. To put that in context, there were approximately 243 million returns filed for the period.

* Many penalties can be waived if the taxpayer can show "reasonable cause," but many tax professionals believe the IRS has so narrowed the definition as to be almost unreachable, unless you are willing to die. To aggravate the matter, the IRS has also instructed its personnel to substitute "first time abatement" (FTA) for reasonable cause as a matter of policy. While the IRS argues that FTA is easier to review and administer than reasonable cause, there exists a high degree of skepticism. Why would a taxpayer automatically burn a "get out of penalty-jail free" card if the taxpayer otherwise has reasonable cause? Wouldn't a taxpayer want to keep that card available just in case?

Carolyn lived in New York. In 2006 she had a small business (Talk of the Town Singles) which she operated from her cooperative. In 2006 there was a fire which rendered the place uninhabitable.

She moved. In 2007 there was another fire, one she appears to have caused herself. The local newspaper called her out, and she was thereafter harassed by people in her neighborhood.

She moved to the YWCA until 2010. She did not have a pleasant time there, and in 2009 she fell off a subway platform and fractured her skull on the rails. She was in the hospital for days, and she continued to suffer from dizzy spells thereafter.

Prior to this period, she had a record of filing timely returns. She also made significant efforts to correctly prepare her tax returns, consulting books and references and more than once contacting the IRS. She did not use a paid preparer.

The IRS penalized her for not filing a 2009 return.

She explained that the insurance company settled the second fire in 2009, and she lost a bundle. According to her research, the casualty loss would wipe out her income, and she was therefore below the filing threshold. She did not need to file.

The IRS then trotted technical guidance on a casualty loss. While the layperson might think that the loss would be deferred until the insurance is settled, the tax Code uses a different test:

* If an insurance claim is not paid in the year of casualty AND there is a reasonable prospect of recovery, then the loss is deferred until one can determine the amount of recovery.

* If there is no hope for insurance - or the prospect of recovery is unreasonable - then the loss is deductible in the year of the casualty.

The IRS said that she came under the second rule. She knew that insurance would not cover the full loss from the 2007 fire. The loss was therefore deductible in 2007.

COMMENT: There is enough "what if" to this rule that even a tax professional could blow it.

The IRS wanted penalties for not filing that 2009 return.

The Tax Court reviewed her filing history and her chaotic life. It noted:

Petitioner's error (regarding the proper year of deduction of the portion of a casualty loss for which there is no reasonable prospect of recovery from insurance) is considerably different from the errors made by a taxpayer whose failure to file, late filing, or late payment is chronic. Erroneously deducting a loss in a year later than the correct year is not usually considered to be a blatant tax avoidance technique ..."

Ouch. The Court did not appreciate the IRS wasting its time.

Taking into account all of the facts and circumstances, we conclude that petitioner exercised ordinary business care and prudence under the difficult circumstances in which she was living at the time leading up to the due date of her 2009 return...."

The Court found reasonable cause. She owed the tax, but she did not owe the penalties.

The IRS should have found reasonable cause too. It is troubling that it didn't.