Can $2 Million Be An Honest Mistake?

It is a good idea to look over your tax return before hitting the “Send” button.

Why? Because things happen. Some prep software approximates a black box. It asks questions, you provide numbers and together they go someplace hidden from the eyes of man. Granted, most times the result is just fine. But there are those times ….

They were preparing their 2017 tax return using a popular tax software, which shall remain nameless. They reached the point where the software wanted mortgage interest. Easy enough. They entered “21,201.25.”

The software did not accept pennies.

That, folks, is a lot of mortgage interest.

The tax Code has no intention of allowing an unlimited deduction for this type of interest.

Is it ever possible to get past the $1,000,000 (or $750,000) limitation? Well, yes, and it happens all the time. Borrow money on commercial real estate (say a strip mall) and there is no limitation. Borrow money on residential real estate - as long as it is not a principal residence - and there is no limitation. An example would be an apartment complex.  The limitation we are discussing is personal and involves debt on your house.

Back to the Busch’s.

That mistake made their tax refund go through the roof.

They liked that answer.

They sent in the return.

The IRS flagged the return, which was not hard to do when the interest deduction was larger than the allowed debt for purposes of calculating the deduction itself.

The IRS wanted the excess refund back.

The Busch’s would do that.

Then the IRS also wanted a heavy penalty (the accuracy-related penalty, for the home gamers).

The Busch’s said they wouldn’t do that. An exception to the accuracy-related penalty is reasonable cause, and they had reasonable cause all day long and three times on the weekend.

And what was that reasonable cause, asked the IRS.

It was an “honest mistake,” they replied.

The Busch’s represented themselves, the lingo for which is “pro se.”

The Court acknowledged that mistakes happen. One can get distracted and enter a wrong number, one can transpose, one can get surprised by what a software might do.

But that is not the mistake here.

The mistake here was failing to review the return before sending.

The biggest number on the return – literally – was that interest deduction. It hung over the form like a Big Texan 72-ounce steak on a normal-sized dinner plate. 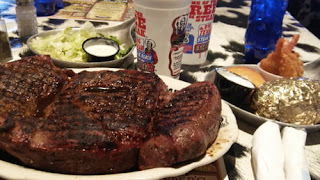 A careful review of the return after it was prepared would most certainly have caught the error; actually, even as little as a quick glance at the return probably would have done so.”

The Busch’s got stuck with the penalty.