Change In The Kiddie Tax

Congress took a tax calculation that was already a headache and made it worse.

I am looking at a tax change included in the year-end budget resolution.

Years ago a relatively routine tax technique was to transfer income-producing assets to children and young adults. The technique was used mainly by high-income types (of course, as it requires income), and the idea was to redirect income that would be taxed at a parent’s or grandparent’s (presumably maximum) tax rate and tax it instead at a child/young adult’s lower tax rate.

As a parent, I immediately see issues with this technique. What if one of my kids is responsible and another is not? What if I am not willing to just transfer assets to my kids – or anyone for that matter? What if I do not wish to maximally privilege my kids before they even reach maturity? Nonetheless, the technique was there.

Congress of course saw the latent destruction of the republic.

In a classroom setting, the idea was to slice a kid’s income into three layers:

Having sliced the income, one next calculated the tax on the slices:

Let’s use an example:

Let’s take the same numbers but change the tax year to 2018.

Congress changed the tax rate for slice (3). It used to be the parent’s tax rate, but starting in 2018 one is to use trust tax rates instead.

If you have never seen trust rates before, here you go: 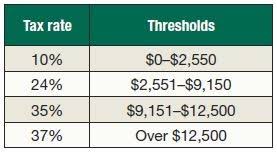 Have over $12,500 of taxable income and pay the maximum tax rate. I get the reasoning (presumably anyone using trusts is already at a maximum tax rate), but I still consider these rates to be extortion. Sometimes trusts are just that: one is providing security, navigating government programs or just protecting someone from their darker spirits. There is no mention of maximum tax rates in that sentence.

Let’s add gas to the fire.

The kiddie tax is paid on unearned income. The easiest type to understand is dividends and interest.

You know what else Congress considered to be unearned income?

Government benefits paid children whose parent was killed in military service. These are the “Gold Star” families you may have read about.

Room and board provided college students on scholarship.

Seriously? We are taking people unlikely to be racking Thurston Howell III-level bucks and subjecting them to maximum tax rates?

Fortunately, Congress – in one of its few accomplishments for 2019 – repealed this change to the kiddie tax.

We are back to the previous law. While a pain, it was less a pain than what we got for 2018.

Kids who got affected by the kiddie tax changes can go back and amend their 2018 return.

I intend to review kiddie-tax returns here at Galactic Command to determine whether amending is worthwhile.

It’s a bit late for those affected, but it is something.