I am a general tax practitioner, but even within that I set limits. There are certain types of work that I won’t do, if I do not do enough of it to (a) keep the technical issues somewhat fresh in my mind and (b) warrant the time it would require to remain current.

Staying current is a necessity. The tax landscape is littered with landmines.

For example, did you know there is a tax to pay for Nationals Park, the home to the Washington Nationals baseball team? 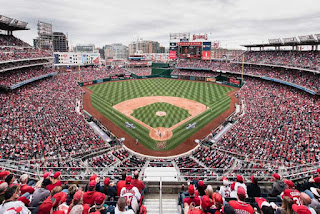 I am not talking about a sales tax or a fee when you buy a ticket to the game.

No, I mean that you have to file a return and pay yet another tax.

That strikes me as cra-cra.

At least the tax excludes business with gross receipts of less than $5 million sourced to the District of Columbia.

That should protect virtually all if not all of my clients. I might have a contractor go over, depending on where their jobs are located in any given year.

Let’s go to the word “source.”

Chances are you think of “source” as actually being there. You have an office or a storefront in the District. You send in a construction work crew from Missouri. Maybe you send in a delivery truck from Maryland or Virginia.

I can work with that.

I am reading that the District now says that “source” includes revenues from services delivered to customers in the District, irrespective where the services are actually performed.

What does that mean?

If I structure a business transaction for someone in D.C., am I expected to file and pay that ballpark tax? I am nowhere near D.C. I should at least get a courtesy tour of the stadium. And a free hot dog. And pretzel.

COMMENT: My case is a bad example. I have never invoiced a single client $5 million in my career. If I had, I might now be the Retired Cincinnati Tax Guy.

I can better understand the concept when discussing tangible property. I can see it being packaged and shipped; I can slip a barcode on it. There is some tie to reality.

The concept begins to slip when discussing services. What if the company has offices in multiple cities?  What if I make telephone calls and send e-mails to different locations? What if a key company person I am working with in turn works remotely? What if the Browns go to the Super Bowl?

The game de jour with state (and District) taxation is creative dismemberment of the definition of nexus.

Nexus means that one has sufficient ties to and connection with a state (or District) to allow the state (or District) to impose its taxation. New York cannot tax you just because you watched an episode of Friends. For many years it meant that one had a location there. If not a location, then perhaps one had an employee there, or kept inventory, or maybe sent trucks into the state for deliveries. There was something – or someone – tangible which served as the hook to drag one within the state’s power to tax.

That definition doesn’t work in an economy with Netflix, however.

The Wayfair decision changed the definition. Nexus now means that one has sales into the state exceeding a certain dollar threshold.

While that definition works with Netflix, it can lead to absurd results in other contexts. For example, I recently purchased a watch from Denmark. Let’s say that enough people in Kentucky like and purchase the same or a similar watch. Technically, that means the Danish company would have a Kentucky tax filing requirement, barring some miraculous escape under a treaty or the like.

What do you think the odds are that a chartered accountant in Denmark would have a clue that Kentucky expects him/her to file a Kentucky tax return?

Let’s go back to what D.C. did. They took nexus. They redefined nexus to mean sales into the District.  They redefined it again to include the sale of services provided by an out-of-District service provider.

This, folks, is bad tax law.

And a tax accident waiting to happen.